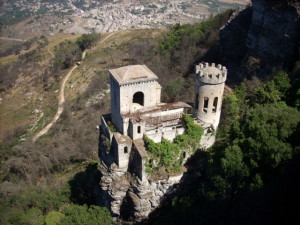 
Centuries of history and myth make Mount Erice a fascinating place famous for its cobbled streets and medieval habitation. For centuries Erice has been a place of love; with the Castle of Venus in which legend says that during his voyage Aeneas stopped by here to give homage to his Goddess mother. One can also visit the Elyminian-Punic walls; the Chiesa Madre; the Balio Garden, and the municipal museum.

There is also the Cultural Scientific Centre “Ettore Majorana” where seminars and meetings attended by the most important scientists of the world take place throughout the year. 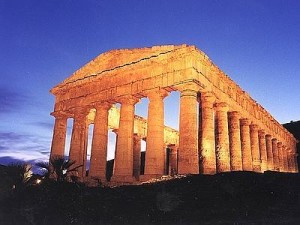 
An archaeological area located on Mount Barbaro, it was (together with Erice) one of the principal settlements of the Elyminians. Legend tells us that it was founded by Alceste, son of the Trojan Egesta, who hosted Aeneas during his voyage after the fall of Troy. 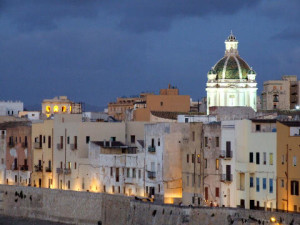 
The city of Trapani almost entirely surrounded by sea and salt with its unique wedge shape, cutting through the Mediterranean.

Thanks to its location and the important role of trade, all the civilizations that dominated the Mediterranean have left their mark. 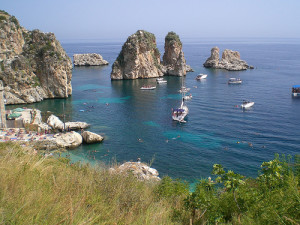 
Through these web pages we will tell you the fascination and the beauty of the first natural oriented reserve. The sharp line of Dolomitic calcareous rocks which form the Reserve extends, in the western part, from the Gulf of Castellammare, along the eastern side of Capo San Vito peninsula that is on the Tirreno sea between Castellammare del Golfo and Trapani.

The territory of the reserve starts from Cala Mazzo in Sciacca up to Tonnarella Dell’Uzzo and it extends mostly in the town of San Vito Lo Capo and only in part in that of Castellammare del Golfo.


On the northwest coast of Sicily, nestled in the bay between the Zingaro Nature Reserve to the west and Mount Hood to the east, lies San Vito Lo Capo, capital of couscous, the dish of peace and a symbol of integration between peoples and cultures different.

San Vito Lo Capo is an ancient fishing village that still retains strong Arabic influence. In this place, light, scents and flavors mingle to produce a landscape typical Mediterranean colors and waters: low white houses covered with bougainvillea, a white sandy beach overlooking the turquoise sea, guardian of ancient treasures in a long embrace a kilometer towards the Mediterranean.